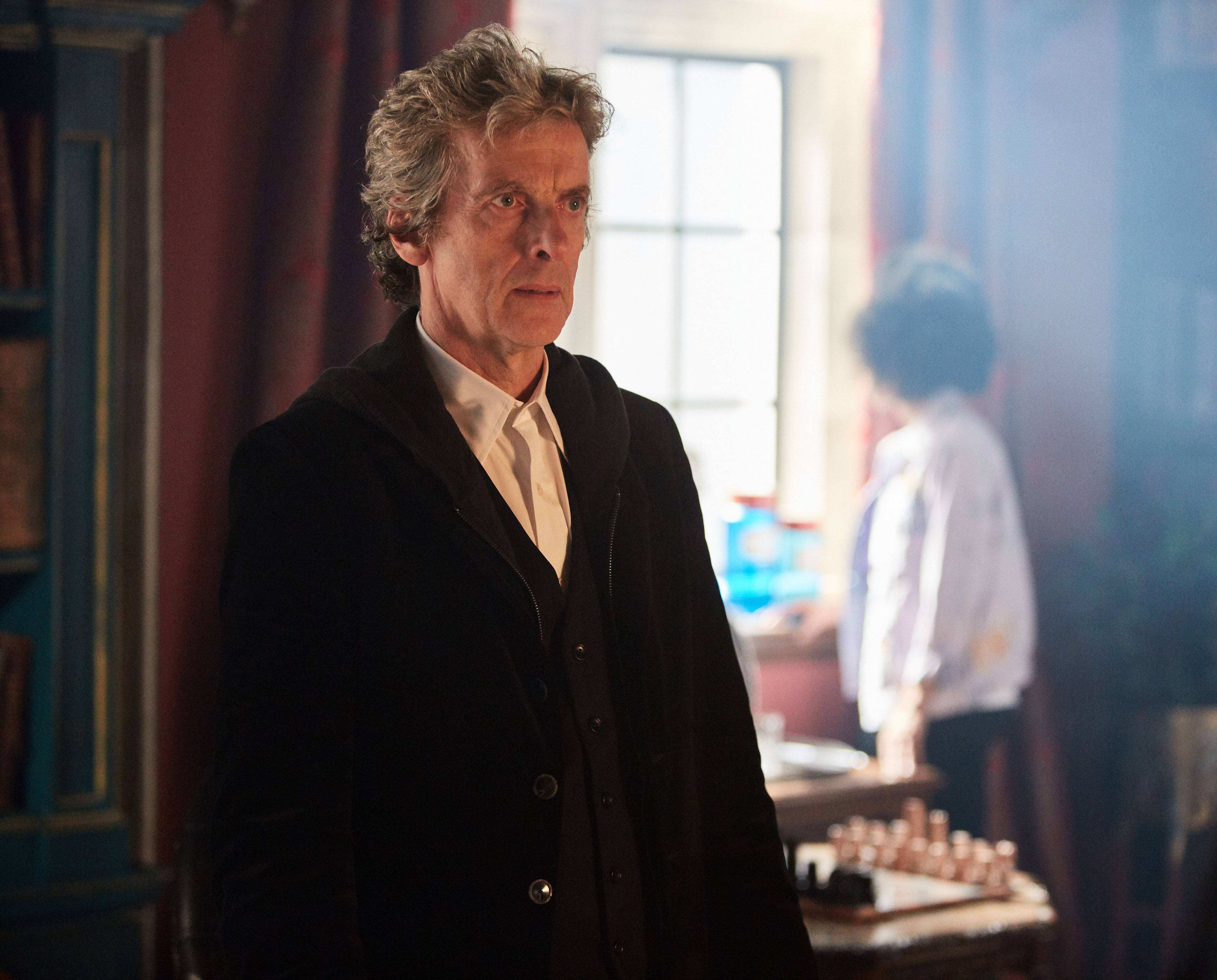 Still traumatized at the thought that bacon sandwiches may have feelings, the excitement over last night’s episode of “Doctor Who” is reminding me why I love this show.  After a year break, ‘The Pilot’ felt like both a new start and also returning home after a long journey,  Filled with questions about what is to come, the series premiere was an hour of dichotomies wrapped in a bow decorated with humor and suspense.  Shiny and new yet filled to the brim with classic references, a new situation for The Doctor yet he is surrounded by mementos from his past, a mysterious secret he is guarding that is reminiscent to items from his past, ‘The Pilot’ was well worth the year wait.

Bill (Pearl Mackie) has landed and she is surprisingly fun.  Witty, empathic and up for adventure, Bill searches out answers and has a curious streak.  This is exactly what brings her to The Doctor’s door and into The TARDIS.  Though, The Doctor (Peter Capaldi) and his TARDIS are not out gallivanting across the universe as they normally are in the usual Doctor meets Companion scenario.  The Doctor and Nardole (Matt Lucas) have taken up residency at a University and our hero is now a popular Professor who gives mesmerizing lectures on whatever his heart desires. (See?  Ace wasn’t wrong, she was just early!)  From what Bill has heard, it appears The Doctor has been a Professor at the University for around 50 years, though what truly confuses her is how he got a police box physically into his office.  When a girl that Bill has a crush on named Heather shows her a strange puddle and then disappears, the trio begin a jaunt through space and time to try and figure out the mystery before the water gets them first.

This episode is built as an amazing jumping off point for someone who has never seen an episode of “Doctor Who” and would like to see why we are all so obsessed.  At the same time, Steven Moffat’s love for the show all the way back to 1963 is quite evident with the insane amount of references and throwbacks that were included in this single episode.  For fans of the classic series like myself, or those who are not and would like to learn a bit more about what is hiding in ‘The Pilot,’ let’s break down the biggest references that I caught while watching the episode.

Susan and Other Possible References to The First Doctor

No one ever told us what happened to The Doctor’s granddaughter Susan.  She was our first companion: she was us.  While we have always hoped that we (and The Doctor) would see her again, it has not yet come to be.  Though, in the Season 10 premiere she did make an appearance, whilst as a photo on The Doctor’s Desk.  It is heartwarming to know that The Doctor would keep photos on his desk of his loved ones even after all of the death and heartbreak that he has lived through.  What is troubling is the possible mention that Susan may be dead in the episode.  I hope this is either an assumption on The Doctor’s part, or he was speaking of River and it sounded as if he was including Susan in his response.

Even before the episode aired many fans were wondering if the new companion’s name, Bill, was in honor of the actor who portrayed the first incarnation of The Doctor; William Hartnell.  While I like to believe this is true, there was another name in ‘The Pilot’ that seems to back up this theory; Bill’s crush turned possible episode villain Heather.  While I personally am bias to the name myself, it is also the name of William Hartnell’s wife and daughter.  This may be just a coincidence, however it is more wonderful to believe that it is intentional.

In addition to character names and photos, the Out of Order sign hanging on The TARDIS looks almost exactly like the sign used in ‘The War Machines’ when The First Doctor travelled with Dodo.  Though this may be only a coincidence, the only slight difference between the signs is that one has a border.

Sonic Screwdrivers, Busts and Other Decorations

The first thing you notice on The Doctor’s desk in a cup full of the Sonic Screwdrivers from his past.  While this is fun by itself, if you take a closer look you will notice there are two Screwdrivers that were previously believed destroyed forever.  While this should not really be a surprise after Matt Smith’s Eleventh Doctor showed us how The TARDIS can produce Sonic Screwdrivers, no confirmation was ever made that previous versions could be replicated.  The most popular of these two is the one that exploded in ‘The Eleventh Hour’ and was used mostly by David Tennant’s Tenth Doctor, and the other was Tom Baker’s Fourth Doctor and Peter Davison’s Fifth Doctor’s Screwdriver that was destroyed in ‘The Visitation’.

There are other notable decorations in the office that harken back to previous adventures and seem to show a nostalgic side of The Doctor.  The bust of William Shakespeare reminds us of when The Tenth Doctor traveled with Martha Jones  and her red jacket in ‘The Shakespeare Code’ while the stained glass work of Robin Hood brings fans back to when The Twelfth Doctor and Clara Oswald ran into the heroic thief in ‘Robot of Sherwood’.

Destiny of The Movellans 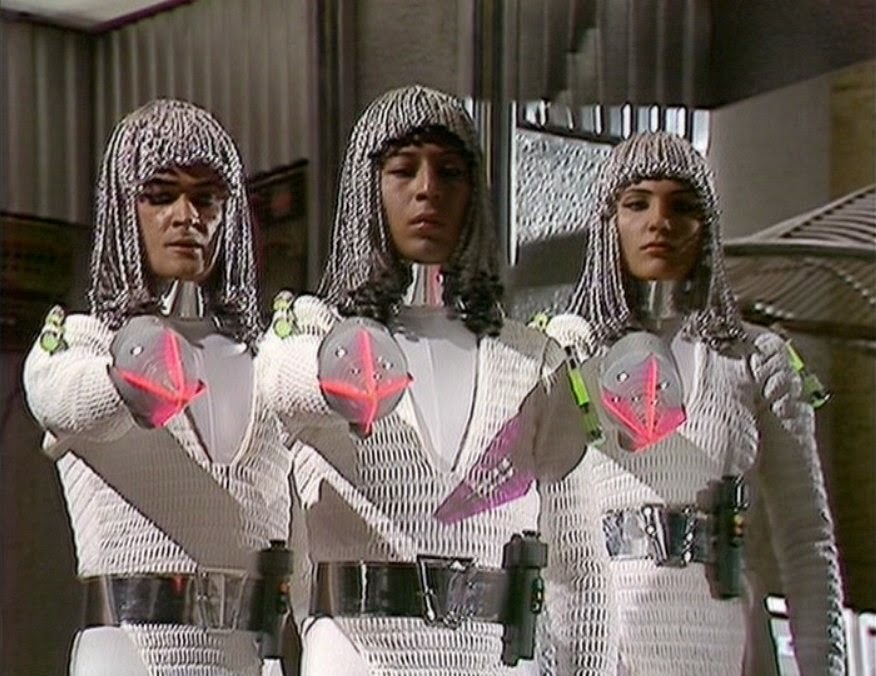 Doctor Who ‘Destiny of The Daleks’ – The Movellans.  Photo: BBC

As a fan of The Daleks and Classic Who, I jumped out of my chair when I saw The Movellans.  Who are The Movellans you ask?  Well, let’s travel back to an episode during Tom Baker’s run titled ‘Destiny of The Daleks’.  The Movellans are a race of androids (who oddly resemble Dave Chappelle’s impersonation of Rick James) who wage war on The Daleks for many years.  One of my favorite parts of Steven Moffat’s writing during Capaldi’s era is that he is bringing back much of the classic Dalek lore including Davos and references from ‘Genesis of The Daleks’ and now Destiny.  If you have not watched these episodes, I would highly recommend it as they are really good and are essential Classic Who viewing.

When we see The Doctor on Earth again and find that he has been a University Professor for at least fifty years, at first you assume that he has decided to hide for a while just as he did after the loss of Amy and Rory.  However, throughout the episode he makes comments about not being able to do something due to a promise.  Do what?  Is he not supposed to leave, take a companion or explore the universe?   Who did he make these promises to?  Again, this brought me back to Classic Who and when we first met Jon Pertwee’s Third Doctor.  After regenerating, The Doctor was exiled to Earth by The Gallifreyans and was not allowed to leave.  They did send his TARDIS with him, so just like in the first half of this episode, The TARDIS loomed in the background not being used and the magical door to adventure.  This is probably not a planned reference, however both situations feel very similar and I am excited to unlock the mysteries to all of the current unanswered questions that we have.

There are many other references throughout the show such as The Doctor playing Guitar, The Doctor as a teacher again just like in ‘Human Nature/Family of Blood’ and ‘Beethoven’s Fifth Symphony’ being played just as it was in ‘Under The Lake/Before The Flood’.  Please make sure to discuss any additional references you noticed in the comments below.

Overall, ‘The Pilot’ was a great start to a new season.  Was the villain a little weak?  Sure.  No matter how hard you try, besides drowning, it is hard to make water terrifying.  But, was that really the point?  We all tune in to meet the new companion.  She is us in our ongoing journey with the magical, mysterious man from a distant world.  No matter how well we think we know him, there is always something new and I cannot wait to see where this season takes us.  Though we all know the end of this season will result in Peter Capaldi regenerating, let’s not focus on the last page.  It is the adventure between here and then that matters.

Visit The Who Girls Shop